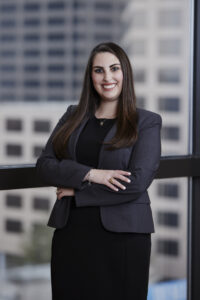 Melanie H. Melasky joined McCranie Sistrunk Anzelmo Hardy McDaniel & Welch as an associate in the New Orleans office in 2022. Prior to joining the firm, Melanie worked for defense firms focusing her practice on workers’ compensation, insurance defense, and the Longshore and Harbor Workers’ Compensation Act (“LHWCA”). Melanie was a law clerk to The Honorable Chief Judge Ulysses Gene Thibodeaux of the Louisiana Third Circuit Court of Appeal, as well as an extern for The Honorable Justice Greg G. Guidry of the Louisiana Supreme Court.

Melanie earned her Bachelor of Arts in Jewish Studies from Tulane University in 2015 and earned her Juris Doctorate and Civil Law Certificate from Tulane University Law School in 2017. Melanie was awarded The Order of Barristers Award for oral advocacy and brief writing, the CALI Excellence for the Future Award in Trial Advocacy, and a Tulane Pro Bono Krewe Award for commitment to community service. During law school, she studied at the Tulane University Law School Maritime Law and Law of the Sea program in Rhodes, Greece. Melanie was an executive board member of the Student Bar Association and an active member of the Moot Court Board, serving as the Competition Chair for Appellate Teams. Additionally, Melanie participated in the Pace National Environmental Law Moot Court Competition, competing in 2016, with her team placing as quarterfinalists with the team brief recognized as a “Top 10 Brief.”  Melanie coached her team and competed again in 2017.

She is a member of the Tulane Law School Moot Court Practitioner Advisory Board for the 2022-2024 term.